A little over a month ago I decided to start an Open Device Lab. It’s been something I’ve been thinking about ever since it was first mentioned during PhoneGap Day in September of 2012. Over the years I already collected enough devices, so the decision wasn’t a difficult one. But having the devices is just one step.

The next step was finding the space for the lab. I have just a single room as office for my day job, but it’s large enough for two people. It’s not as big as I’d like, but will do nicely. The other problem was that my lab is not directly sponsored or part of a company. It is just me. That means that everything I need to buy, I need to pay for myself. I couldn’t just buy a couple of big tables with professional device stands.

I still needed to store my devices in a way that it is easy for visitors to use them and to quickly charge them. The solution was actually quite easy to find and quite affordable. And better yet, it’s available worldwide… at IKEA.

The first problem I needed to solve was where to store all the phones and tablets. You can’t just throw them all in a big pile in some drawer. Some of the devices are quite expensive and I want them to last longer than a couple of weeks. The second problem is that I had quite a few of them and only limited space.

The solution was to use the KVISSLE letter tray, which has four different trays and each tray is big enough to allow you to store six to ten devices. The trays are covered with cork which makes sure the devices stay in the same place and each tray can be pulled towards you for easy access.

They can be stacked, but are quite heavy, so I wouldn’t put more than one on top of another.

I have a total of four of these letter trays and this holds a little more than 80 different devices.

Being able to store the devices is great, but without being able to efficiently charge them, you can’t use them. Just having a bunch of chargers plugged into AC outlet isn’t a proper solution. I needed to be able to charge multiple devices at the same time and offer multiple types of cables. Just having a couple of micro-USB cables isn’t going to cut it. I needed a proper charging station — in fact I needed a couple.

The same IKEA series that has the letter tray, also has a cable management box that is perfectly usable as a charging station. It’s just a small metal box that is big enough to house an AC extension socket and a couple of AC adapters. On top of the metal box is a cork cover with a hole through which you can access the cables to charge the phones. And while the phone is charging you can just place it on top of the cork cover. 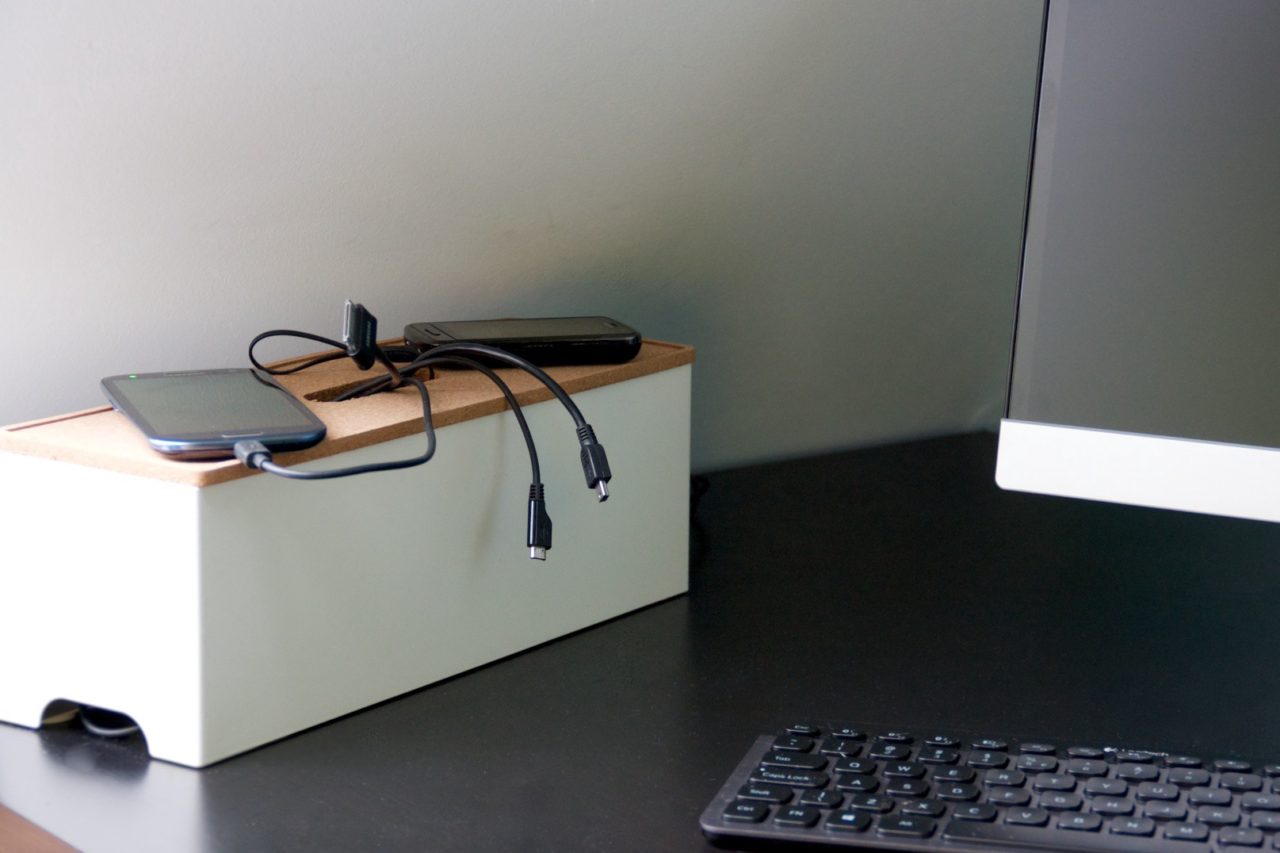 Tip: most chargers use power even when not in use. If you’re using a simple timer you can turn the charging stations off during the night and save some power.

So we got our devices stored safely and properly charged, now we actually want to use them. I needed a way to use the devices without just keeping a dozen or so on the desk itself. A proper device stand that can hold phones and tablets.

And once again I found a solution, but I’m sure nobody at IKEA expected a RIBBA picture ledge would be a perfect device stand. It’s just a small wooden shelve that is usually mounted to the wall, but the U-profile makes it ideal for keeping the devices in a position that makes it very easy to view the screen.

I’ve placed little felt surface protectors on the bottom of the shelves, so you won’t scratch the table if you move the shelve, but you could just as easily use it in it’s intended way and mount a number of them below each other on the wall and make a big wall of devices.

In total I’ve used 4 KVISSLE letter trays which cost € 20 each. I’ve used 3 KVISSLE charging stations which cost € 10 each. And finally 2 RIBBA picture ledges which cost € 6 each. This makes a total of € 122. A single professional device stand costs more and can hold just a few devices.